Facebook has been reminding me about the trip I took three years ago from Lexington, Kentucky, to Kansas City, Missouri.  It’s a 9-hour drive to KC, but I split the trip into two days so that I could play tourist along the way.

Historic New Harmony, Indiana, is about 3 hours from Lexington. You’ll see signs for it as you speed along Interstate 64 and it’s an easy 15-minute drive south from Poseyville to get there. It’s on the Wabash River.

I didn’t have time to give New Harmony its full due, so I decided to go to just one of the labyrinths there–that’s right, they have more than one!  I went to the Harmonist Labyrinth: 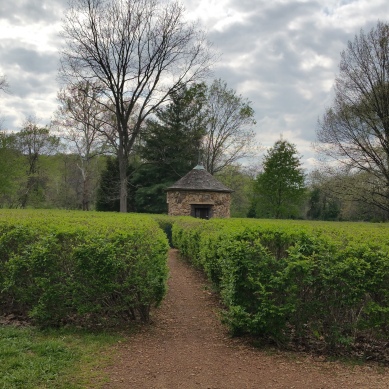 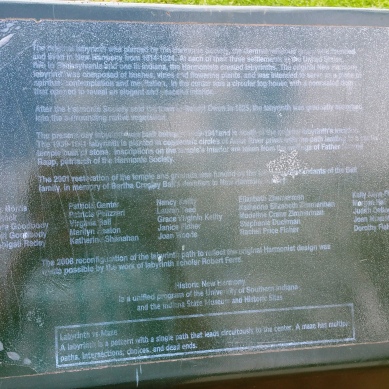 PROBABLY MORE THAN YOU WANT TO KNOW:

Harmony Society:  A Christian theosophy and pietist society founded in Iptingen, Germany, in 1785. Due to religious persecution by the Lutheran Church and the government in Württemberg, the group moved to the United States, where representatives initially purchased land in Butler County, Pennsylvania. On February 15, 1805, the group of approximately 400 followers formally organized the Harmony Society, placing all their goods in common.  Under its founder and spiritual leader, Johann Georg Rapp (1757–1847); Frederick (Reichert) Rapp (1775–1834), his adopted son who managed its business affairs; and their associates, the Society existed for one hundred years; roughly from 1805 until 1905. Members were known as Harmonists, Harmonites, or Rappites. The Society is best known for its worldly successes, most notably the establishment of three model communities, the first at Harmony, Pennsylvania; the second, also called Harmony, in the Indiana Territory, now New Harmony, Indiana; and the third and final town at Economy, now Ambridge, Pennsylvania. (Wikipedia)

New Harmony:  Established by the Harmony Society in 1814 under the leadership of George Rapp, the town was originally known as Harmony (also called Harmonie, or New Harmony). In its early years the 20,000-acre settlement was the home of Lutherans who had separated from the official church in the Duchy of Württemberg and immigrated to the United States.  The Harmonists built a new town in the wilderness, but in 1824 they decided to sell their property and return to Pennsylvania.  Robert Owen, a Welsh industrialist and social reformer, purchased the town in 1825 with the intention of creating a new utopian community and renamed it New Harmony. While the Owenite social experiment was an economic failure two years after it began, the community made some important contributions to American society.  (Wikipedia)

The Other Labyrinth:  Cathedral Labyrinth and Sacred Garden.  This outdoor site offers an opportunity to walk and meditate on an ancient single-path labyrinth. The pattern of this labyrinth duplicates the original at Chartres Cathedral, built in the 12th century near Paris, France. The Medieval Gothic Cathedrals across Europe often had labyrinths built into their floors. Their geometric pattern related to the unity of each cathedral’s design. The rose in the middle of the New Harmony cathedral labyrinth identifies its Chartres origin.  The Cathedral Labyrinth is open free to the public 7 a.m. to 11 p.m., daily.  (Visit New Harmony)

4 thoughts on “The Harmonist Labyrinth in New Harmony, Indiana”